My brother Robert and I own an antique boat, a 1947 Ventnor that belonged to our father. We had the boat restored over 8 years, and began to use it in 2013. 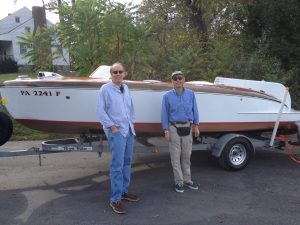 The Ventnor mostly stays on a trailer in the garage. We take it out a couple of times a season, and joined the Antique and Classic Boat Society (ACBS), a club for classic boat owners.

Other than the Ventnor, I’ve been out of the boating scene for 25 years. We used to have a sailboat, but the family crew bailed out on me, and I sold the sailboat.

The ACBS asked for volunteers to staff a booth at the Atlantic City Boat Show in March, and I volunteered. As I drove to Atlantic City at 9 a.m. that cold windy winter morning, the Convention Center loomed up like Emerald City impressing Dorothy. I’d never visited before. The Convention Center is huge- it looks as big as Philadelphia’s. It was a challenge just finding the ACBS booth inside.

The Center was packed with …Boats! Why was I surprised? Because in 2007 as with the housing and auto industries, the boating industry was dead. The boat business edged back from the brink, and as I was learning, has revitalized itself. While some of the engines are imported, the boats are largely made in the USA. The enormous show hall was overflowing with boats. These were not yachts fit for Donald Trump; they were targeting the upper middle and upper class average person.

In addition to boats, a successful show needs boaters. Families mobbed the show. People must be confident when they consider spending $50,000-$75,000 which was my sense of what the average boat on display cost.

More can be extrapolated from the Boat Show. Most people don’t have the entire purchase price to kick in. Financing must be available today. Fuel must be fairly reasonable; this was a powerboat show. If people want to fish or to joyride, they need to be able to fill the tank.

I noticed a 42’ fishing boat near the ACBS display, with four 350 horsepower outboard engines. The boat seemed nice, but nothing grand. I guess-timated $25,000 an engine, so figured the boat must sell for a couple of hundred thousand dollars. How wrong I was. Here is the photo I took when my shift ended at the ACBS. 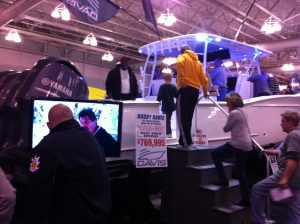 I wonder how many buyers took advantage of the “Boat Show Special” $769,000 price tag?

My job in the ACBS booth was to chat up potential members who might have classic boats, or be interested in buying them. Owners get tired of them, as with anything else and put them up for sale. As I learned, compared to a new boat, a classic boat can be downright reasonable.

I met lots of nice people and learned that boats and vacation homes are often handed down from generation to generation.

Most of the Boat Show attendees were Caucasian – there were a few African Americans but almost no Asians, and few other ethnic folks by my observation.

This also tells me that the average middle to upper class East Coast Caucasian family feels pretty confident at present, and is doing well.

Our economy has come back from the brink of 2007. Credit George Bush, the Federal Reserve, and Barak Obama.

Let’s hope that something doesn’t rock the confidence of boat buyers who support this mostly domestic “Made in USA” industry.

LEE TABAS is available as a consultant or an expert witness. Areas of expertise include: Ability to help through experience in banking and investing: loans, deposits, administration, collection, leadership, liability, conflicts of interest and documentation. Experience as a Trustee for Trust and Foundations. Has track record of helping entrepreneurs with growth. Please call for further information.
________________________________