Nancy and I are generally fascinated by offerings for free stuff that come in, usually real estate or timeshare sales.  They promise a free gift in exchange for 90 minutes of your time.  We’ve gotten golf clubs, bargain overnights in Williamsburg and New York City.

Recently an oversize post card came in with a scratch-off number, as well as an electronic device. When we turned on the device, a number glowed in blue, which matched the scratch-off number that we found on the postcard. We’d won a) $25,000, b) a new car, c) an Android tablet computer.  All we had to do was call up and make an appointment.  It turned out to be associated with Split Rock in the Poconos. We’d heard of it, but never visited. It could be a nice outing, so we called and made arrangements.  The drive was easy, 1 ½ hours from home.  We gave our name to the receptionist, and Barry, a 70 ish man introduced himself. He disclosed that the program was for sale of timeshares.  Next, we went on a tour around the community. It is quite nice with a combination of upscale and ordinary houses, and some condominium timeshares. There were restaurants and several beautiful lakes.

After the tour, we went to the closing room, with a dozen or so round tables. The room was busy with other prospects.  Split Rock is associated with Interval International, a large timeshare company. As Barry explained it, we would buy the share at Split Rock, and pay the split rock maintenance fee, which is a lot less than the maintenance fee in New York City, for example, and would get points which could be used at any of the Interval properties. He showed us a book which had some nice Hyatt and other facilities around the world.  Next he showed us the price of a timeshare, which was about $12,000 and could be mostly financed.

Nancy and I thought that our children might like to use a condo at Split Rock. The place was nice and convenient to Philadelphia.  When I asked about documentation, he said that was available only if we agreed to buy, and that the price was good for today only.  Generally my thought about timeshares is that they buy ground by the shovel and sell it by the teaspoonful, and that there was no real reason to get yourself obligated, when you can stay overnight at a hotel, with no long term commitments.  While we could probably get what we wanted at Split Rock, I imagine that it would not be so easy to get reservations at one of the other Interval properties. Looking online later, that was confirmed.

By that time, our 90 minutes were up, and we indicated that we’d like our prize. Barry directed us downstairs. A sign asked us to have a seat, and someone would be with us shortly.  In a few minutes, a 50ish year–old man motioned for us to follow. Apparently this man was the Closer – Barry wasn’t successful, so this guy would try again.  We stated the same objections that we had before. This time, the price came down to about $10,000.

When he wasn’t making headway, he did give us the prize- an Amiko tablet computer. We haven’t gotten it set up yet, but it sounded more impressive in the marketing material.  I guess if you want people to think that what you are doing is top quality, you would give a top quality item. It sort of reinforced our feeling that we made the right decision not to participate.

Puerto Rico Takes a Hit to the Head 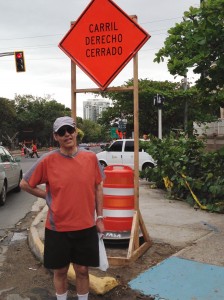